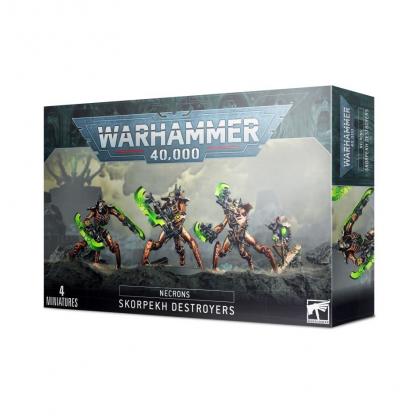 Striding forward in a rush of ungainly steps, their weaponised limbs sweeping in a whirlwind of gore, Skorpekh Destroyers feed their need to kill whenever they are unleashed upon the battlefield. Nothing else can override the hard-wired desire to kill that empowers these deranged Necrons.

Canoptek Plasmacytes use their monomolecular proboscis to inject an infectious, sentient energy into the degranged members of the Destroyer Cults. This hateful substance – as dangerous as it is powerful – heightens their nihilistic insanity and drives their mindless annihilation to new heights.

Skorpekh Destroyers are among the most lethal close-combat killers within the ranks of the Necron legions. If tearing the enemy army asunder is what you seek, then look no further than these gloriously insane slaughterers, whose killing prowess you can amplify even further with the attention of the Plasmacyte!