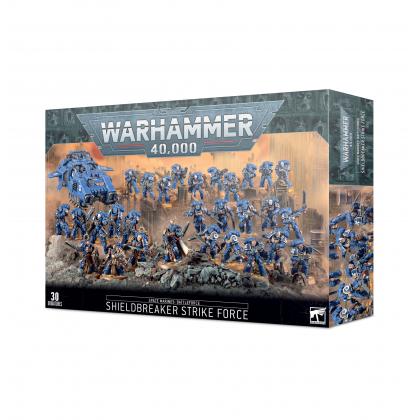 The Space Marines are the Emperor’s will made manifest. They are his Angels of Death, descending to the battlefield from mighty warships to cleanse the foes of Mankind from the face of the galaxy. For ten thousand years, the Space Marine Chapters have been the shield and sword against the horrors that beset Humanity. Genetically enhanced super-soldiers, they are among the greatest warriors to have ever existed. They are stronger, faster and more resilient than the Humans they are sworn to protect. They are psycho-indoctrinated from youth, rendering them immune to fear and staunchly loyal. On the battlefield they are relentless, determined warriors who will stop at nothing to achieve victories nigh on impossible for unaugmented soldiery to achieve.

The Shieldbreaker Strike Force offers an elite force of melee specialists in the Captain, Bladeguard Veterans, and Assault Intercessors, backed up by a gunline of Intercessors and Heavy Intercessors, as well as the formidable firepower of a Storm Speeder.